DUP SAYS NO TO VACCINATION QUERY 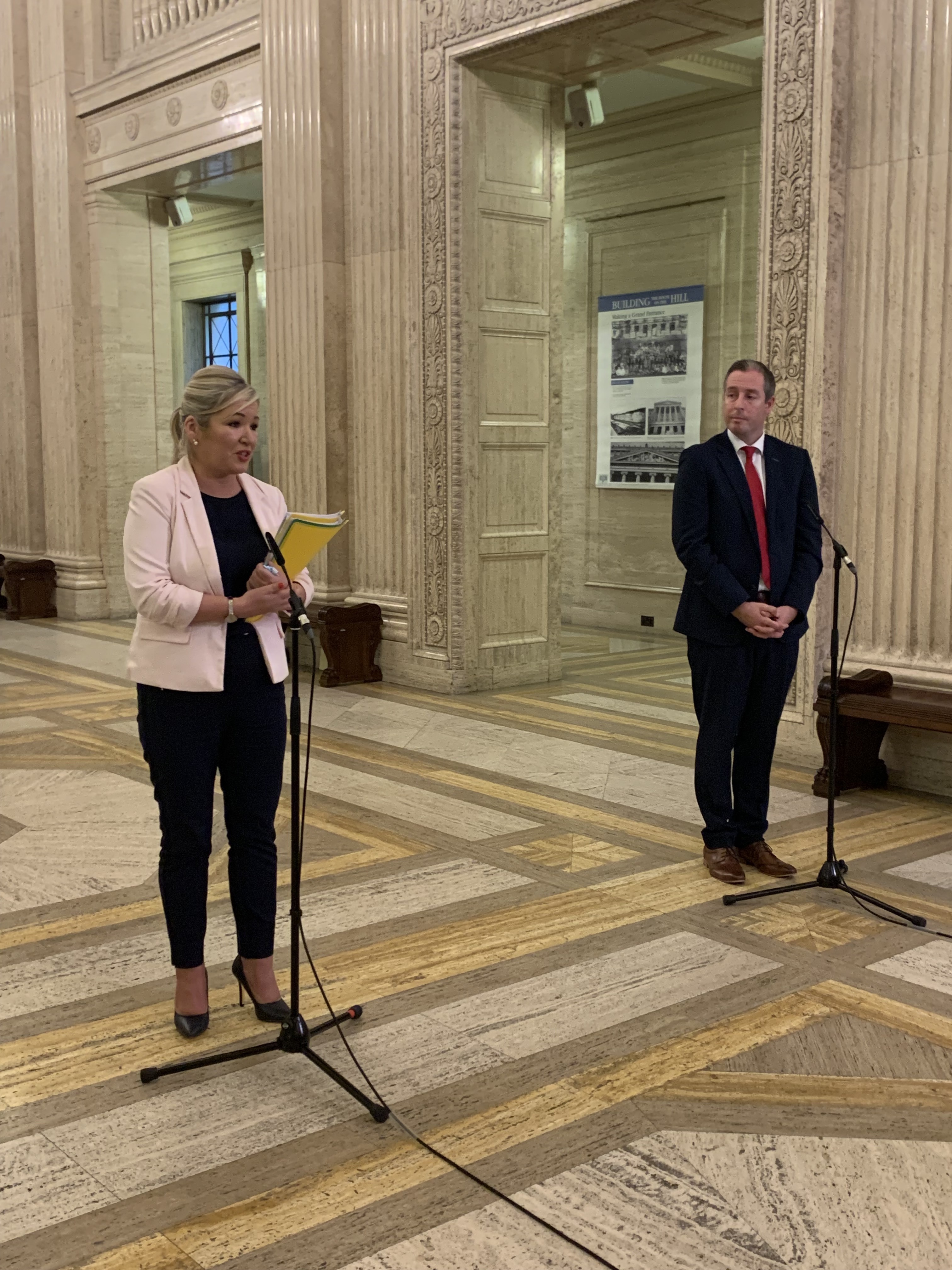 What a sorry saga. And it’s not over yet…

On the evening of Monday, September 20th I was alerted to Twitter content about Covid 19 - posted by DUP MLA and former economy minister Paul Frew - which sparked my interest so I contacted press officers for the five parties of government in Northern Ireland to ask them a simple and reasonable question about the Covid-19 vaccines.

I wanted to know if all their MLAs are vaccinated in line with public health advice.

The Alliance Party was the first party of government to reply. They said all their MLAs are vaccinated.

The next party to reply was the Ulster Unionist Party. They said all their MLAs are vaccinated, and offered the extra detail that they are all double vaccinated.

On the morning of Tuesday, September 21st Sinn Féin confirmed all their MLAs are vaccinated.

The SDLP responded next. They said all the MLAs who could be vaccinated are, and offered the extra details that one MLA is medically exempt, and both of their MPs are also vaccinated.

None of the four parties – Alliance, UUP, Sinn Féin, SDLP - raised any concerns about the question I was putting to them.

The DUP, however, failed to respond to my query. I contacted them on Monday, Tuesday and Wednesday with not even an acknowledgement of my press query.

I know I could ask about councillors, MPs and other parties but the focus for my initial query was with the Executive parties and their MLAs because they are the people setting out covid rules, regulations, and promoting public health advice, telling the public in the north/Northern Ireland they should be vaccinated and so on.

On Wednesday 22nd I was on the Nolan show with former Stormont Health Minister Jim Wells. The issue of vaccines, misinformation, the DUP’s reluctance to answer my simple question, and abortion were discussed.

You can watch the show here: ME ON NOLAN LIVE

On the morning of Thursday 23rd I got around to reading a blog post DUP MLA Paul Frew had quote tweeted on Twitter on Wednesday night.

The blog should not be allowed to remain online because of the nature of the content.

It was angrily criticising myself, a range of media colleagues and others.

Mr Frew clearly had second thoughts about his tweet linking people to the blog post or he had advice to remove it. He deleted his tweet.

He also blocked me on Twitter - and the other journalists.

I am liberal with the block button but politicians blocking reporters for doing their job is something else entirely.

Later on Thursday I was up at Stormont Parliament Buildings because the First Ministers were due to give a press conference after the Executive’s first face to face meeting in over a year.

I was a guest on the BBC Radio Ulster Talkback programme at lunchtime to discuss vaccine passports and other matters.

Like with the Nolan show the night before I was invited to raise the DUP vaccine question issue. You can listen back on BBC Sounds.

After a long delay the press conference with the two First Ministers took place just after 5.30pm in the Great Hall at Stormont.

I asked Paul Givan and Michelle O’Neill about misinformation, and ask Mr Givan about the DUP reluctance to answer my question about vaccination.

Here is the transcript:

Me: “I am aware at the meeting today that the Executive discussed the scourge of misinformation in how Stormont tackles the covid pandemic. Could you both let us know your thoughts on this serious?

First Minister of Northern Ireland DUP MLA Paul Givan: “Well, that is not a question that I am going to answer, although I think I have put it out into the public domain in respect of that.

“I don’t think, like any other healthcare people receive, or conditions that they have, we don’t ask them for that personal level of detail.

“So, I think we need to be careful whenever it comes to saying to people ‘Are you vaccinated? Are you unvaccinated?’ in terms of the way in which that then falls out. Because, are we going to start asking people about other health conditions, and I think we need to respect people’s right to privacy.”

Me: “This isn’t a privacy issue though, First Minister.”

Me to Executive comms officer: “But he’s not answering the question though.”

Me to First Minster of Northern Ireland DUP MLA Paul Givan: “Is there anyone who wouldn’t be vaccinated in the DUP for what would be described as ‘cultural, ethical or religious reasons’?"

“Because this isn’t a personal medical question. You are the party of government that are asking the public to get vaccinated so are you all following your own advice?”

First Minister of Northern Ireland DUP MLA Paul Givan: “Again, I believe we need to respect people’s right to privacy whenever it comes to their own health.”

Me to First Minster of Northern Ireland Paul Givan: “Why is the DUP the only party that won’t answer this question?”

First Minister of Northern Ireland DUP MLA Paul Givan: “It’s a matter for other parties if they want to provide that information. But whenever it comes to people’s own private health we don’t ask them ‘what vaccinations have you received?’ We don’t ask them about the conditions that they have. And I believe that is something we need to respect, people’s right to a private life when it comes to that particular issue.”

Deputy First Minster of Northern Ireland Sinn Féin MLA Michelle O’Neill: “And just to say, yes, you are right Amanda, there was a discussion around misinformation, and that is one of the biggest challenges that we have, particularly in terms of the vaccination.

“We raised and questioned a number of issues with the Health Minister and with the Chief Medical Officer and they have said that they will seek to try to correct some misinformation that is out there that has now been identified...particularly around the issue of vaccines. for example.

“And I think in going forward part of the winter plan has to be around communication with the public.

“And I think that we need to, as things have to get a bit simpler, with the restrictions, we need to try with the public health message, to make that very clear.

“The misinformation that is out there is very damaging in terms of, particularly the uptake of the vaccine.”

So, the DUP is objecting to a question I am not asking.

It is not a privacy matter. I have no interest in anyone’s medical history.

Are all DUP MLAs vaccinated in line with the public health advice? Yes or No?

If there is anyone with a medical exemption that is included in the answer yes.

On Friday, September 24th I was a guest on the U105 Frank Mitchell programme to discuss the latest from Stormont.

Frank asked me about the DUP vaccination issue so I brought him and listeners up to speed.

I was joined on air by my commentary colleague Alex Kane who also believes the DUP needs to answer the question.

Also on Friday morning I was reporting on LBC News about a crime story and the presenter asked me about the DUP vaccination issue.

Questions now left hanging in the air include:

Are there DUP MLAs who could be vaccinated but are not?

Do we have elected representatives in Northern Ireland who are anti-vaxxers?

Do we have elected representatives in Northern Ireland refusing a vaccine on what has been described as ethical, religious or cultural grounds?

Are some of the elected MLAs in this jurisdiction victims of misinformation?

Are some MLAs leaving their views intentionally ambiguous to appeal to or not offend anti-vaxxer elements in constituencies here?

What are MLAs telling constituents who ask them about the vaccines?

Following the tragic death of Cllr Paul Hamill has the DUP carried out an audit of its elected reps to ensure they are not victims of misinformation?

If all the DUP MLAs are all vaccinated in line with public health advice that is brilliant news. For them as individuals, and everyone else.

If they are not vaccinated and could be then they should explain why. When you are in a position of political leadership you don't get to duck this one.

The latest from the Stormont Department of Health:

The latest figures (September 24th) from Stormont indicate 88.5% of adults are vaccinated. Being vaccinated is a mainstream activity. However, NI is behind the rest of Ireland and the rest of the UK.

Included in the north's unvaccinated group - who account for 70-80% of covid hospital admissions, will be: people who would be described as anti-vaxxers; there will also be people who don’t like needles; people who are scared; victims of misinformation; people who can’t be bothered: people who think they don’t need it; and people who have not got around to it yet.

I was keen to get the vaccine as soon as I was offered the opportunity because I wanted to protect myself, people I know and don’t know, the health service, and because I am a strong believer in collective solidarity.

I got AstraZeneca and have been double jabbed since June. I had no issues after my first jab, and just a small amount of tiredness and tenderness in my arm after the second jab.

I am so proud and full of admiration for the science nerds who brought the vaccines to us in such an efficient and safe manner.

Only one political party in N Ireland government won’t confirm whether their elected members are following their government’s advice on vaccination - the DUP - the largest party. There’s leadership for you. Well done ⁦@AmandaFBelfast⁩ for asking. https://t.co/55FVsqKJYL

Following the tragic death of Cllr Paul Hamill did the #DUP carry out a duty of care audit to ensure no other elected reps are victims of covid 19 and vaccine misinformation?

Here is an interview I did in August with a former conspiracy theorist Philip Blair that may be of interest to you: